Exactly what you were looking for. Nail trends for this year.

In this direction nothing super outstanding will not be – will remain fashion on a rounded shape of nails. The length of the free edge of the nail plate can be short 2-3 mm or an average of about 5 mmAmateur almond-shaped nails will be satisfied, this form is very fashionable in the new autumn – winter season.Blue eyeshadow was big on the runway, so it should be expected that the nails would match with an equally, if not darker blue to match the fall/ winter 2015-2016 makeup trends. This was certainly true for the creations by Benjamin Puckey at Karen Walker. The sexy looks like those seen on Monique Lhuillier’s runway show were also complemented with shimmering blue nails that really caught our eyes and captivated our senses. They also included a combination color using Morgan Taylor’s Bright Eyes polish with a pearlized bold teal for the ultimate in fun looks showing off a happy-go-lucky mood. Vibrant metallic blues were huge on the Costello Tagliapetra catwalk, with the models having their nails painted by Julie Kandalec. It appears that most of the New York Fashion Week nails are in a blue hue, as they take on funkier styles such as on the Marissa Webb show, where we spot matte negative space electric nails using the OPI Light My Sapphire color. Blues turn to darker teal when we consider the Nicole Miller nails cut short and looking lovely. 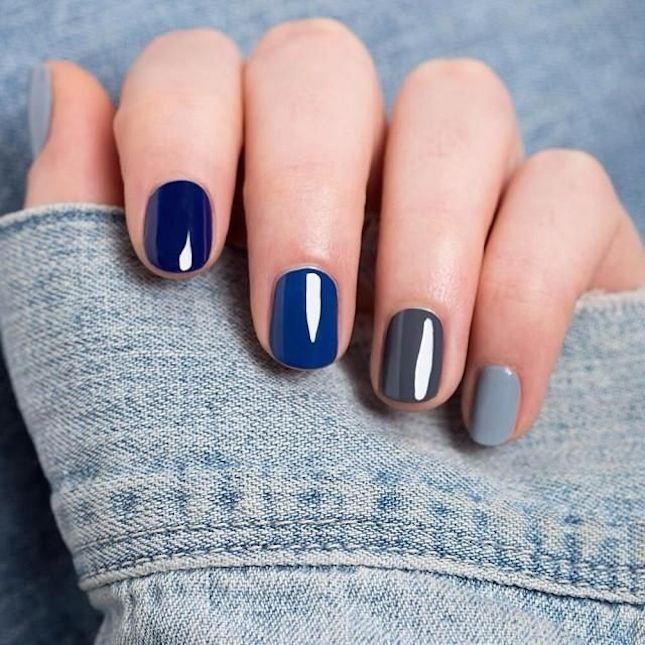 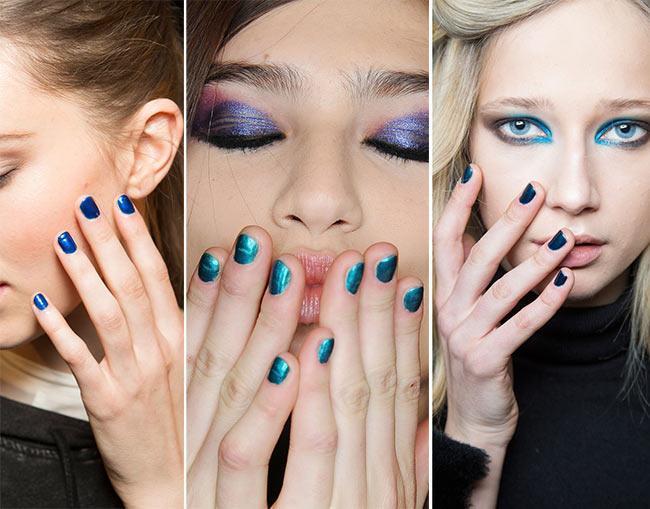 This manicure has long been located in the arsenal of the most “advanced” fashionistas. There will be no exception and the next season. Many well-known designers and brands offer to give preference to the moon manicure, while using a variety of contrasting colors.For example, Gareth Pugh basic models chosen for their gold and bright blue lacquer, Dior – purple and white, Badgley Mishka – burgundy and silver, and Philip lymphoma black and peach. Best of all this manicure will look on your nails with a round and almond-shaped.

As before, the urgency preserves red lacquer and all its nuances, like Emanuel Ungaro, Bebe, Vionnet, Giles, Adam. Almost all fashion designers offer a combination of scarlet and a short length of the nail. One of the trendiest is blue.It was his brand Cacharel and Gareth Pugh asked to choose women of fashion for next autumn and winter. It does not lose its popularity and the classic gray, as suggested by Karen Walker or Felder Felder, black, like Tracy Reese and Zang Toi.Those ladies who love the natural colors, for sure will be delighted delicate pastel shades. They prefer for this season leading brands such as Yves Saint Laurent, Valentino, Issa, DG, Rachel Roy.

Metallic and jewel tones are gorgeous in general, but when you add them to your nails, it appears as if you yourself are worth a million bucks. There is just something utterly alluring about wearing an emerald or sapphire color on those fingers of yours and having them catch the light with a light shimmer as you go about your day and enjoy your activities. That is probably why we found the Nicole Miller rich jewel toned collection to be so inspiring, particularly when you see a black and green combination to create the perfect emerald. The Marissa Webb sapphire colored nails were equally as mesmerizing, leading us to look for ruby and garnet reds among others. A rich gold nail polish was added to the Dennis Basso models’ fingers for an overall wealthy and elegant look. Long, golden nails with artistic line designs were seen at Mary Benson and well loved by us all.

If you liked the darker blue hues or even the gothic feel of some of the collections presented throughout the Fashion Weeks, then you would have loved the use of black, not just on lips but also on nails. Add hand-painted detailing for some spectacular nail art as the black lacquer turns into the perfect back from on which one can create artistic designs. At Tanya Taylor, this detailing was in a silver hue and included added glitter for better effect. The dark manicure at A Detacher may be a simple look but it adds a whole boatload of drama to the designer fashion show. Midnight plum nail lacquer was a big thing at Yigal Azrouel, while the school girl style seen at Carmen Marc Valvo was complemented with a dark look that had a sharper black line running up and down the nail over the shimmering of the base. Grunge was major inspiration for Sass & Bide as they added dark nails to a dark look that included rocker hairdos and smudged eyeliner.

You can never go wrong with a neutral palette. Have it painted onto short and rounded nails and you have something that is so versatile, it matches nearly anything you decide to wear. A classic clay color was the perfect neutral tone for Ohne Titel on the house’s runway show. An Arctic inspired manicure was created at the Thakoon fashion show, really complementing the barely there makeup on some of the models sent onto the catwalk. At Erin Fetherston, the nails were simple and in the nude, with a touch of gold adding some fun to the otherwise neutral tones. Cristiano Burani has nails that look as amazing as they are soft and simple, in neutral earth tones that are in direct contrast with those very red lips. Chanel’s gone simple and neutral as well, with slightly thicker white beige combination monochromic colors.

While a gorgeous light color unto itself, the dove grey nails seen at Sally Lapointe remind us of the makeup and color trends for fall/ winter 2015-2016 in general. Grey is totally in at this point for the fall and winter seasons and we can get a head start on wearing them from now. Not all the nails were short throughout the Fashion Weeks, even though most were overwhelmingly so; when it comes to John Richmond, we have awesome long and pointed metallic grey nails that match with the darker grey eyeliner and shadows perfectly. It is a great look, particularly for the winter.

Simple white mani seen at Rachel Zoe is also quite endearing on its own, a color that makes one look younger and more innocent all in one fell swoop. Add the gorgeous white nails seen at Holly Fulton for the fall 2015 collection, complete with those funky octagonal sunglasses in nude, and we have a look that appears to be bringing the brightness of summer into the bleaker winter days. Tadashi Shoji’s fall collection featured effervescent, weightless silhouettes and nails to match in dual tones, the white cream color applied with a sponge and covering the tips fully. It was like having clouds on your own fingers in a way.

We and our partners use cookies to give you the best online experience, including to personalise advertising and content. Data about your interaction with this site and the ads shown to you may be shared with companies involved in personalisation of ads on this site and elsewhere online.

Please let us know if you agree.